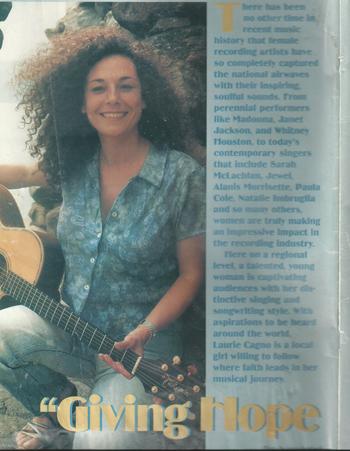 "When it comes to singing like a bird, we’ll take Laurie Cagno any day. Cagno is like a drug-one of nature’s healing agents that alternately produces both tranquility and euphoria in the listener. Someone call a doctor! With a vocal delivery that cuts through it all, Cagno is one of those rare singer/songwriters who possesses the ability to stop time (or at least slow it to a crawl). Take a spin on This Time, and you’ll find yourself gazing off into space, at peace with the world, forgetting, for the moment, whatever you were doing. The spiritual overtones in her songs speak of hope and forgiveness, despite whatever circumstances may have triggered them. They ring with a sincerity that is rare in music today, mainly because Cagno is a genuine spirit, reflecting that spirit. Yet another pleasant side effect is her remarkable ability to shift vocal gears from soothing to sultry, and the suggestiveness of Sweet Rhythm is enough to get any motor going."

There has been no other time in musical history that female recording artists have so completely captured the national airwaves with their inspiring soulful sounds. From perennial performances like Madonna, Janet Jackson, and Whitney Houston, to today's contemporary singers, that include Sarah Mc Lachlan, Jewel, Paula Cole, Natalie, Natalie Imbruglia, and so many others.

Women are truly making an impact in the recording industry. More on the regional level, a talented young woman is captivating audiences with her distinctive singing and songwriting style. With aspirations to be heard around the world, Laurie Cagno is a local girl willing to follow where faith leads on her musical journey. Feelance writer ~ Bill Nutt

​An exclusive interview with Laurie Cagno and Montage Magazine.

so completely captured the national airwaves with their inspiring soulful sounds.

From perennial performers like Madonna, Janet Jackson, and Whitney Houston,

Morrisette, Paul Cole, Natalie Impruglia and so many other woman who are truly

making an impressive impact on the recording industry. Here on a regional level,

Laurie Cagno is a local girl from NJ willing to follow where faith leads in her musical journey.  She talks easily about the dream that changed her life. She’s not claiming any mystical powers or any higher level of consciousness. She knows this story may even make people laugh. But she "had this dream and her life hasn't been the same since".

(See entire article on the next sub-page of Homage/Reviews/Inspiration.)